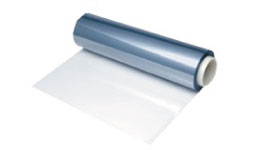 Silicone release film is coating silicone on base film to make release force for adhesive. These base films are: PET, LDPE, HDPE, PP. Silicone release film best benefit is cheap and substrates being used in a release liner makes up over 20% of the release liner market and is growing steadily. There are usually cost savings seen due to faster production, more labels per reel and a potential broader range of adhesive options.

What is release liner

A release liner is a paper or plastic-based film sheet (usually applied during the manufacturing process) used to prevent a sticky surface from prematurely adhering. It is coated on one or both sides with a release agent, which provides a release effect against any type of a sticky material such as an adhesive or a mastic. Release liners are available in different colors, with or without printing under the low surface energy coating or on the backside of the liner. Release is separation of the liner from a sticky material; liner is the carrier for the release agent.